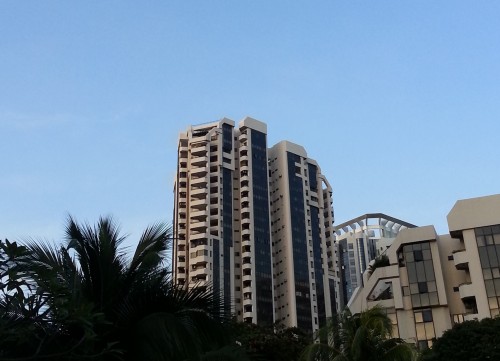 I’ve been writing proposals and papers for the last few weeks. I miss making things up. Here are some made-up things: five snapshots of the near future for people in cities.

The technological offspring of cheap audio gadgets that turned any surface into a speaker and the “throwies” developed by early tech pioneers Eyebeam, sonopods were initially used by art pranksters and the remnants of the Occupy movement to set up ad hoc communications networks during events and interventions: the tiny sticky pods, scattered across facades and windows, powered by the kinetic energy of the throw that catapulted them skywards, would set up microvibrations that turned the fabric of the city into a pulse-carrying message platform. Each pod used its weak RFID transmitter to co-ordinate with its nearest neighbours, relaying simple messages to its peers in an ad hoc swarming network that relied on having thousands of sonopod nodes in the hands of the network creators.

Lacking the budget for the direct actions beloved of the early 21st century, instead police recruited Ogilvy in an attempt to counter-jam the culture-jammers, a move that was so successful in co-opting protestor chic to the high street and the boardroom that activists were soon able to rely on more efficient network infrastructure donated by the ad agencies, leaving their sonopods in the basement alongside their V for Vendetta smog masks. Instead, construction companies adopted the technology, using the sonic networks to bypass the increasingly crowded radio spaces that made traditional mobile communication unreliable and unusable for critical infrastructure projects.

Once habitat printing technology had been brought to the mass market by Barrat, contractors began to use more and more resonant materials in their extruded designs, making sonopod communication even more efficient, until the mid-century north-bound locust migrations demonstrated all too tragically the similarities between the resonant frequencies employed on the sonopod network and those generated by the flapping of thousands of wings. Now the devices are used mainly by NGOs for rapidly networking the pop-up cities that spring up in the interstitial regions of the world, helping entrepreneurs and aid agencies alike by establishing pervasive communications in a matter of days rather than years, the only dark spots indicating the presence of resolutely unresonant dwellings made of inexpensive mud, or specially-imported granite.

Posing as contractors at a metro station, the gang were able to carry out the theft by posing as workers to install a new layer of piezoelectric flooring over the existing municipal layer, siphoning off commuters’ collective energy. Using human workers for labour-intensive jobs was a new thing, reflecting both a recent public appetite for “artisanal” small-batch engineering projects and a corporate taste for the cheapest labour option: a rash of criminal resource thefts like this and the infamous Melbourne reservoir appropriation would lead to the rapid reappraisal of an approach that made a brief but immense contribution to the criminal “resource-laundering” being carried out on a global scale. The metro company revoked the energy discount on everyone’s travel to make good the loss, before hiring forensic visual data scientists from G4S to track and detain the gang, identifying them in just days despite only being able to make use of cumbersome quantum computers rather than the recently-developed “string looms”, still the province of top-priority researchers in hydrology and space weather. The thieves were indicted in over 4000 separate civil cases by individual commuters, in an important landmark for the acceptance of automated legal work. However, as they’d all purchased rural identities some weeks previously, they were able to defray the costs with their own subsidies from UNAGRI, originally designed to mitigate the harassment meted out to rural companies and individual by actors within city jurisdictions.

Using modified city-issued personal tasers to rapidly ionise the air around a mark, depleting oxygen levels and causing unconsciousness without contact, perpetrators could avoid the hazards involved in touching computationally-enabled clothing able to analyse the qualities of physical contact and communicate this information (alongside a DNA sample) to the relevant law enforcement agencies. Once their wearer ceased moving, the clothing computers’ batteries would run down rapidly, enabling their replacement with anachronistic cotton garments that left no defence against the indentured service that was the destiny of anyone outside the city networks.

Recognising the ability of vermin – rats, pigeons, foxes, seagulls – to penetrate the seams of the city, and aware of the difficulty the city network facilities team faced in achieving a similar degree of coverage, the mood in city hall was ripe for the sort of solution currently being described as a ‘policy flip’, using the weight of a mighty problem to spin it around ju-jitsu style and create a solution as powerful as the previous issue had been dire. The vermin were chipped, swallowing tiny transponders and signal boosters and relay points placed strategically in the dumpsters of petribeef left outside every corner bistrotech in the evenings. Together, powered by the scurrying movements of their carriers, these components came together in a mesh that spanned the city: when, historically, it had been common for cynical citydwellers to say “you’re never more than six feet from a rat”, now it was true that they were never more than a metre from a node in a network that was open, robust and truly pervasive. In practice, rather than talk from people, this city-wide mesh network carried traffic from the infrastructure monitoring bots that kept things running, freeing consumer bandwidth: the chattering, wheeling robogulls, echoing the old modem screams, and the scuttling rats in the ceilings helped building speak to building, away from the busy human and AI noise. Genetically-modified strains of the common pathogens carried in these populations were introduced, performing a similar role in the network as the headers in the old internet protocols.

Now, of course, the biological substrate is largely silicon, since Latvian separatists hacked discarded army Big Dogs and sent them in to cities to hunt the rats, these terrier-ists literally packet sniffing their way through pipes and sewers to unravel the maintenance network and condemn buildings to decay and collapse. The robots succeeded only in adding their clumsy bodies to the network, each one replacing the node it removed: city facilities saw the potential and began to introduce retired medical carebots, early Festo-inspired biomimics and antique Roombas to the network. Below our feet and in our aircon channels, this first generation of servants lives out its days, labouring unnoticed, keeping our towers upright.

Shivering in their easyprint regolith igloos on Nova Lincoln by the Mare Moscoviense, the real time sounds of the city piped to their jawbone monitors were a comfort to the first Realty Expeditionary Force. Waking to silence one morning, they were the first to realise the extent of the disaster back home.

So I can’t make much of a claim for originality, perhaps. But these might serve as useful catalysts for unpacking other people’s ideas of the future, prompts to act as the ground for critical questions like these: