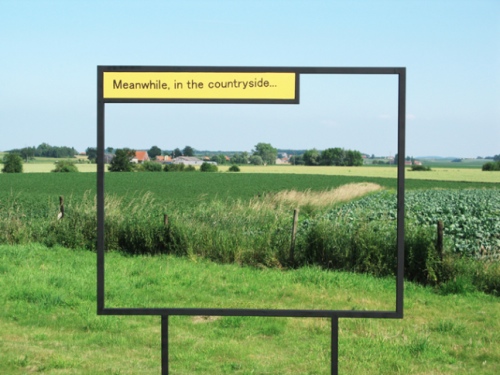 The above is a picture of a piece by Niklaus RÃ¼egg, set in a village on the border between France and Belgium.

I want to make a game with this idea, handing out the same 16 frames to teams with cameras and imagination and seeing what they bring back. Everyone gets a “Suddenly..!”, a “POW!” explosion, a “Meanwhile, back at base..”, and a “But – “, and maybe a few dry-erase speech balloons, and an afternoon to go and use the city as their source. Maybe commuters crowding onto a train could be recast as henchmen rushing to their stations. Or a flock of pigeons could be accompanied by a single “Fly, my pretties!”. Or a frame could be strapped to a bike for authentic speed lines.

I’ve got no idea how you’d judge it. Perhaps you’d get credit for smuggling in certain locations, or for particular themes, or for managing to subvert comic convention, or just for running around town in spandex dressed as Captain Super. Perhaps the best one would be from the team of film students who make a comic out of other people making comics, though that could just as likely be the worst. Maybe the most popular one would be a collaboration between a six-year-old and their grandpa.

Anyway, I’d like to see it, and if I make it back to Bristol in time for the next Igfest I might see if I can do something about it.