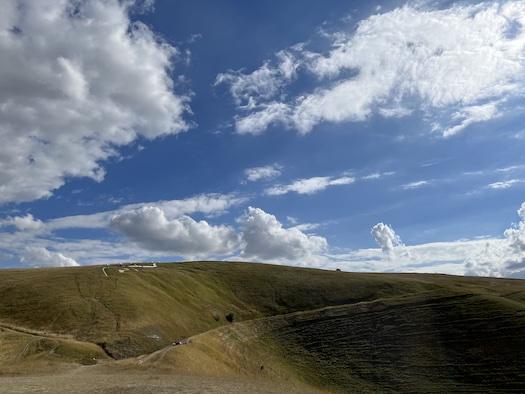 Last Tuesday I was privileged to spend a day chalking the Uffington White Horse. I went as part of a group organised by the London chapter of the Long Now Foundation, as I did last year. We were pounding the weathered chalk that had been added as part of last year’s work. I was late because of traffic caused by the HS2 and East-West railway construction, two other interventions in the landscape that will leave their own legacies for future archaeologists. I assume that the purpose of those grand carvings will be more obvious to them than the purpose of the horse is to us, but perhaps the purpose of the horse was just as obvious to its creators, and the railways will be equally mysterious in another 3000 years.

We heard a lecture on the possible motivations for creating the horse from David Miles, standing in the wind and sun just above the horse’s eye, with contributions from Simon Palmer. It was wonderful to hear people so connected to the horse and the landscape share their own history of the archaeology of the site, covering decades. The whole talk was marvellous. Two things made a particular impression. First, it would likely take just ten years for the site to be overgrown completely, and so since the end of the Bronze Age it has been continuously cared for, meaningful for one reason or another to people. Second, at certain times of year the sun travels over the horse and the hillfort above it to the series of burial sites to west. The horse, then, can be seen as a landscape-scale instance of the ‘sun horses’ pulling the sun across the sky that feature across Bronze Age material culture1. It is carved in such a position that, at the right time of year, the horse pulls the sun from the underworld over to the tombs, connected to the landscape and the invisible forces of the cosmos. 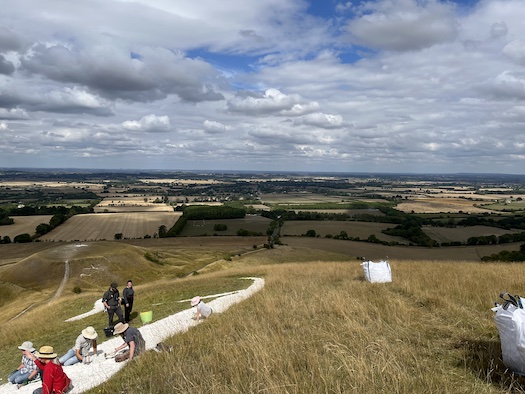 I took my Soma Ether to the site, to see what sort of connection to unseen forces I might be able to experience. It’s a small radio receiver that lacks the circuitry normal radios use to focus on a particular transmission, in order to help you “perceive the electromagnetic landscape around you”. If you knew what you were doing, you could achieve the same effect with more home-made equipment. I thought it might offer an analogue to feeling connected to the cosmic procession of the sun, a way of feeling what it might be like to experience the site as somewhere embedded in a wider set of invisible forces. Walking from the middle of the hillfort (a possible venue for religious events before it was a hillfort) to the horse sounded like this:

(The variations in the sound come from different orientations of the receiver, my movement relative to the sources, and my fingers moving around on the two antennae — I was the aerial, my body picking up the radio signals.)

The scar on Dragon Hill below the horse is another site of possible ceremonial importance. 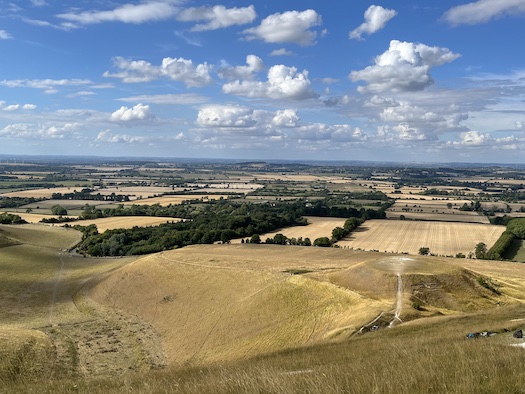 I don’t think standing on the hill with my headphones in the wind was very much like being part of the ceremonies surrounding the horse when it was new. But it helped me imagine being connected to a wider, unseen world, and maybe that’s something we had in common. 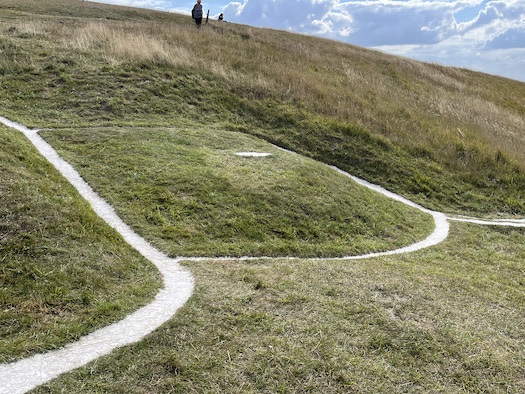 More recent legends have grown up around the horse. If you walk three times around the eye (above) your wish will be granted. The horse is still a way of interceding in cosmic processes, an old thing still managing the future.

Most of the day sounded like this: the thud of hammers collectively crushing chalk into a paste, a series of individual repetitions coming together in a thickened kind of eternity, sounding now, and a thousand years ago, and three thousand, and maybe for three thousand to come.

I’ll be back next year, I hope.