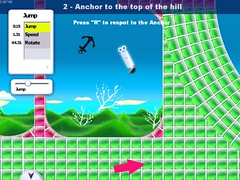 I was going to write about meeting Jeff Burke from REMAP at UCLA, and the conversation we had about using the existing network of mobile phones as data-gathering tools to support civic participation, and I will, but I’ve been distracted.

Tune is a game that was developed as part of a course at the Art Institute of Phoenix, in order to give art students the chance to understand the subtleties of tuning game mechanics. In the creator’s words,

Tune is a game about game design, about tuning game mechanics. Besides controlling the game in the typical way, the player must constantly change the balance of parameters against one another. Depending on the current goal, different tunings of the mechanic will be more or less effective. The successful player will be constantly experimenting with the various parameters, looking for the tuning that best equips them to complete the current goal. Each goal brings a new challenge, and may require a different tuning.

I got really lost in the pacing of the game, working out the best numbers to make it so that my pogo-stick thing fell over slowly enough for me to time my jump movements, the best way to make it possible to chain actions together, not controlling my character’s movement around the screen but nudging it now and again to direct it where I wanted. Of course, this only happened a few times, but each time might be the time I managed to make it happen again (almost, but not quite, classical random reinforcement). Making it happen was a particularly game-y combination of skill on my part and the values of the parameters: one of the things I had to ask myself was whether I should tweak the controls when I’d spent time learning to use them in this configuration. A good way to find an hour’s passed in five minutes.

As a game, this might not sound like the most fun ever, and if that’s what you think then you’re not alone:

the core game isnâ€™t very fun, its yet another physics platformer with kind of dodgy control. I know the point of the game is to tweak it to something you can control, but you canâ€™t change the nature of the character, a weird spinning pogo stick that is pretty difficult to control no matter what the physics values are.

It might be that I enjoyed it just because I was really good at it and this commentator was rubbish. More likely, I’m imagining it in the context of a lesson, one that was “was surprisingly fun” and “quickly became a favorite”. It’s a good example of the kind of thing we’ve been discussing, that the context in which a game is played, the expectations of the players and the goal playing it works towards all determine how well it’s received.

Of course, what it also demonstrates is that games are a really good way to learn about game design, which doesn’t help me understand how they might be good for learning about other domains.