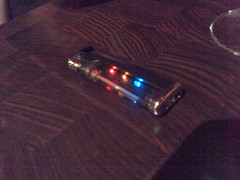 One of the things about being in a pub is you can hear the noise of other people talking around you. Most of the time you can’t make out individual words, or who’s speaking, but you can gauge the level of conversation: there’s a kind of transparency to the social interactions going on around you.

Of course, now that everyone’s stopped leaving their mobiles out on the table, there’s a whole other kind of background social noise that you can’t hear now. I don’t really need to see what people are texting each other, but it’s nice to know how much attention people are giving to other channels of communication.

So I was really taken with this lighter of Steve’s that he found for 20p in Sarajevo. As well as lighting cigarettes, it also illuminates the SMS hubbub: every time someone round the table gets a text or a call, the lights flash. A lighter’s a nice choice for this kind of behaviour: for such an anti-social habit, smoking has a lot of social interaction associated with it, and lighters on the table tend to be public property, at least for the duration of the stay.