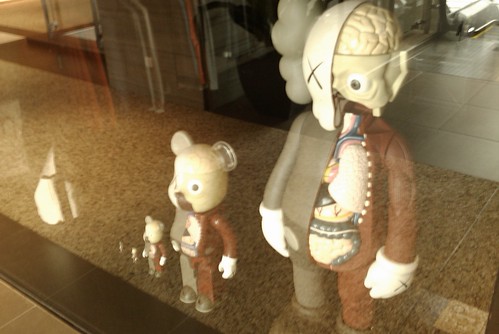 Watching will.i.am, Nicki Minaj – Check It Out (from Simon Reynold’s Blissblog). The hyperreal turfing/locking moves and cartoon facial gestures blurred in front of me until I couldn’t tell whether a performer or an editor was responsible for each movement.

Not being able to tell the difference between reality and manipulated experiences isn’t just about being able to spot photoshop tricks or video manipulation, it’s when people start to ape the facial tics and artificial physical gestures of people – models, actors, people who need to fake enthusiasm and engagement – in the same media that are edited so inhumanly. Not just realistic light and hair textures from graphics packages, but convincing mimes of limbs moving in a non-human way, with the arrested momentum and weightless control of a Pixar film. I’d always thought that there were two classes of behaviour to think about, when thinking about real or virtual behaviour: people behaving like humans and computers behaving like things, But now I think there are two more classes: people behaving like things and computers behaving like people. The digital and the human standing either side of the uncanny valley – they’re not looking for a bridge, they’re making their way down the side to meet halfway.

Perhaps in popular culture we’re already negotiating the sort of collision between human and machine intelligences that’s struck me before: in the linked pieces I (and in the second, me and Keri Facer) mention the possible need for a curriculum that helps us learn about and develop collaboration and cooperation between human and machine intelligences. But maybe putting it like this betrays my limited perspective: maybe by the time that kind of curriculum comes around the gap it’s bridging won’t be apparent to anyone.

Updated 2013-06012: just seen this post from Kevin Kelly making the same observation in relation to Jaron Lanier’s “You Are Not A Gadget”.