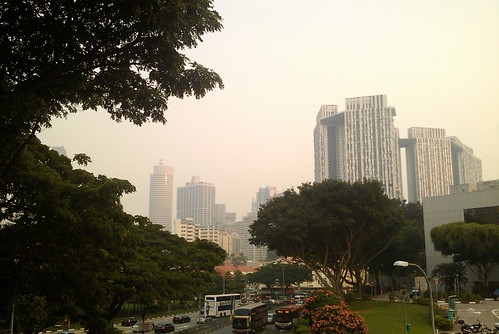 A while ago I was thinking about the idea of located futures – narratives of the future that explicitly locate themselves in a particular place, reflecting the concerns of the people that constitute it. I tried to explore some of the theoretical foundations of the idea in a paper. However, the point of the idea, for me, was always practical. I think that the process of constructing actual located futures would be a valuable activity for people to undertake.

The point of ‘located futures’ is that they pay attention to the embodied and experiential nature of space. So it seems inappropriate to produce a simply textual account of a possible future for a space. Instead, I want to explore how a group of people can create a way of experiencing a place as if the future they imagine was somehow already present. The intervention they create breaks the boundaries that keep the present and the future separate. Their response to the experience helps them to understand their role in bringing this future about, and the impacts this possible future might have on their lives. It’s about speaking to their hearts and imaginations, and text isn’t very good at doing that. But without doing that, futures remain theoretical and present action seems less necessary. And the focus of this whole process is to help people connect the future to their present actions.

(Before I go on to describe one possible way of building a ‘located future’, I should mention that the idea builds on many other peoples’ ideas from within the futures studies community and beyond. In particular my conviction that it would be a productive thing to do stems from the work on ‘mediascapes’ carried out over the years by members of HP Bristol and Futurelab, the work of Stuart Candy, creating artefacts from possible futures, and the site-specific sonic art of Duncan Speakman. Conversations with Stuart and Duncan have helped me work out some of the kinks in the early version of this idea, for which I’m very grateful.)

There are 4 broad stages in the process I’m thinking of right now:

They all need to be piloted, tested, developed in collaboration with other people to become useful. But I need to get started somewhere. So let’s unpack them in a bit more detail.

The first step is to identify a group to work with, one that has a particular relationship to a place. There are a whole range of groups who might be interested in a particular location: a local business, town planners, a branch office of an MNC that deals with local priorities, a social enterprise, a school, an environmental action group, a ramblers’ association, local history groups, or any other organisation with a reason to think about the future on a local scale.

The location is important, of course. It needs to be big enough to walk around. It should make sense to participants – for some groups, official boundaries or names might not be as meaningful as other ways of describing a place. Uncovering the limits of the location the group is concerned with is a valuable thing to do, not only because the later exercises depend on a proper understanding of it but also in its own right, as a way of uncovering the way people think about the group’s relationship to the area. Maybe that’s a workshop of its own: maybe that’s the first part of a longer event.

The next step is to uncover the forces that shape the location. To start with, I want to underline the experiential nature of what we’re about, by concentrating on empirical ways of knowing about the place. One way of doing this is to think about sound. If you close your eyes and concentrate, what sounds can you hear right now? If you mark out your location in squares, what sounds do you hear coming and going in each one? There are different ways to accomplish it, but the goal is to produce a common set of sounds associated with the location.

Once the group have these sounds, the next step is to think about the processes that give rise to them. What are their sources? What groups are involved in sustaining them? How long have they been present? Through considering the wider social processes that give rise to the sounds recorded by the group, a picture of the factors shaping the location is built up. This activity broadens the group’s temporal horizons, enlarging the present that they’ve been considering from “now” to one that spans years, and setting things up for a consideration of the future.

The next activity is the crux of this first stage. What will happen to these processes? How long will they continue? What kind of new processes will arise? What new sounds will they produce? Who will shape the space after you? What groups will make use of the features that suit you so well now? This requires a consideration of the trends and forces acting on the worlds, which in turn demands a consideration of the assumptions the group are working with. This stage is the closest to traditional foresight/futures work, developing a scenario that reflects the aspirations or fears of the group, or builds a consensus around the most plausible context for the group’s future activity. I’m not going to go in to the different ways that can be achieved, or the issues involved in questioning the assumptions about the future people commonly work with – that’s for a later post. But it’s important, and it needs to be done well, generating a future that demands engagement and will challenge people to think about action. Not easy.

With any luck, the previous activities have given us a set of proceses to model. The task now is to work with a professional sound designer to turn these into a convincing environment to walk around in. What I want to end up with is a set of sounds associated with specific areas marked by GPS co-ordinates, so that using some sort of software like AppFurnace it will be possible for people to be offered different sounds depending on where they are. If they walk further in this direction, the gentle wheezing sound of the seaweed reprocessing plant will become louder – if they walk in the other direction, the plant fades away as the grinding sound of the building printer becomes more audible. Or whatever: the lapping of the sunflower oil tides, the chattering of the networked robogulls as they flock around the business district, the implacable thud of the city gate closing for the evening against the genetically-modified reintroduced wolves.

Once the soundscape’s been built and tested, the group have the chance to try it out. How this is accomplished depends on the group and their reasons for thinking about the future, but I would have thought it would be more valuable the closer it happens to the initial scenario creation exercise. But perhaps it would serve some groups better to offer it as a public experience, or as part of a larger community event, or as a download – for some groups it won’t be essential that the experience be limited to the groups that initially designed it. I’ve been imagining it as a facilitated experience, with participants being supported to interrogate their responses and preserve them – but perhaps lessons from this sort of format could be drawn on to develop a range of different approaches. The key thing is for people to move around the space and listen to a possible future.

The experience will be moving and provoke an emotional response to the idea of the future. But for it to have lasting value, there needs to be some sort of reflection on what participants felt and understood, and a consideration of the ways the whole process should inform what the group does next in the present. To begin with, I would think that a carefully-facilitated workshop event would draw out useful themes and ideas, and leave participants with a set of questions and actions. But once a few of these have been carried out, we’d have a better idea of the impacts that have most value for participants, and we could structure the reflection process in different ways – perhaps a game, perhaps a simple guided questionnaire online, perhaps a collaboration with theatre or music groups. The purpose is to give participants the chance to be aware of their responses to the future – the bad and the good – and to offer them a space in which to think about the practical steps they can take in the present. Otherwise we risk troubling people without giving them a chance to do something about it, and that doesn’t seem fair.

So that’s the broad outline. The next step would be to prototype some of these questions and identify people to work with. Work in progress!