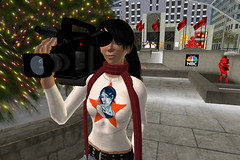 This is a picture of someone in Second Life with a film camera. Where’s the light that’s going to pass through the lens and make the pictures? If it it isn’t there, then why has someone put so much effort into making something that fundamentally doesn’t work?

There are reasons, of course, chiefly that it’s because she’s got a camera that I know she’s a camera operator: the tool on display tells me about her role and identity. Coincidentally, earlier today I heard Cory Ondrejka (CTO for Linden) talking about Second Life, and during this talk he mentioned briefly the idea of “real world as metaphor”, referring to the need for people faced with the possibility of doing anything they want to narrow their choice a little, to start with the familiar.

But, to me, having someone tote a non-functional camera around, or giving Suzanne Vega a guitar to play that doesn’t cause air particles to vibrate, or providing chairs at events for people that don’t need to worry about gravity, all this seems to arise from the same fallacy that led the South Sea Islanders to build radios from straw and coconuts: mistaking the appearance of a thing for its function.

What excites me about Second Life is all the things you can do that are different to the real world. I always feel it’s a bit of a missed opportunity when people spend so much time replicating their first life.