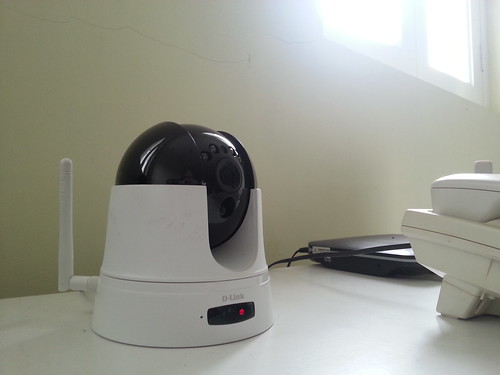 I went on holiday for a week, and when I next came into the little office I rent, I found that three cameras had made it their home too. One is square and thin and pinched-looking, and hunches like a crane watching people’s ears as they pass into the courtyard. The other two are like the photo – spherical shiny things squatting in a functional white plastic housing with a small antennae, like a Victorian gentleman’s collar that has been fitted for etheric transmission, or one of Ming the Merciless’ courtiers in a remake that can’t afford the red and gold trimmings.

The office is a ‘co-work space’, one of many that have sprung up in Singapore like mushrooms on a wet morning. When I joined there were three of us, working in our headphones on the top floor of a Joo Chiat shophouse, but now I am the only one left. The owners use the space below to run their other companies, and sometimes I sit above boisterous strategy meetings where they talk about user engagement and targeting audiences while showing each other the results of google searches, but after these moments of entrepreneurial vitality a natural calm reasserts itself, and I’m left with the wooden floors and the soft white noise of the fan.

It’s a bit odd, to be honest, being the only subject of CCTV surveillance. I suppose that’s the hope, that the cameras never capture anyone else, at least until their co-work offer becomes more attractive. I haven’t had to change my behaviour, really, though on hot days when I came in I would unbutton my top shirt and take my shoes off, and now I am reluctant to be caught looking so unbusinesslike. It’s a casual sort of establishment but I wouldn’t like to be thought to be treating the place like my bedroom. So now I am in what Foucault called a “state of conscious and permanent visibility”1, sitting in my panopticon of one, wondering if the cameras are even turned on, where the inspector might be sitting and whether they might just be an algorithm in a server farm somewhere. It’s a much more efficient arrangement than Bentham originally envisaged, ultimately involving just a single human mind that knows about the internet, a technological update that bears out Foucault’s notion that the power produced through the internalisation of the subject-inspector relation “tends to the non-corporal”, and becomes more profound as it does so. Though I am a little ashamed to be such a perfect example. Tomorrow I will do something outrageous and see if they cancel my contract.

Perhaps I am overthinking this whole thing. After all, even robots have to work somewhere.