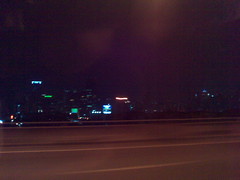 I’m in another hotel, one that looks a lot like the other ones I’ve been in recently, where I had a drink in the bar downstairs, and listened to someone sing My Funny Valentine while I thought about someone a long way away, and I will be very disappointed if tomorrow I don’t have to film a Suntory commercial.

The drive from the airport was incredible, everything very brand new indeed, apart from the taxi touts whose only concession to their new environment seems to be a suit. The airport follows the kind of grey-steel-and-curved-glass-with-blue-highlights template that makes me think of Canary Wharf, although the curves follow a Thai line rather than a Waterloo-style bulge, making it quite distinctive. That, and the fifteen-foot high multicolored statues of figures from Thai myth that gaze down unsmilingly upon you before Immigration.

Between the city centre and the airport they’re building a “skytrain” extension, I think: they’ve got what looks like part of a trainline on a series of concrete pillars that follow the motorway, on the other side of the latticework advertising hoardings, rising high above the bungalow shops and bars that make infrequent splashes of light in the shadowy palms. At first, I thought the tiny, one-floor buildings were vestiges of the recent past managing somehow to continue in the shadow of the future, but then I realised, passing the grey concrete pillars that still lacked a trainline, that they’d decided to skip the future and go straight to building the past: in the ghostly light of the giant advertising hoardings, the pillars looked like ruins from a post-oil age; Roman witnesses to the Saxons busy beneath them, relics of an age where ambitious new transport links were necessary and laudable, instead of hubristic and doomed.

This trip also made me realise how much I love 3G: I had a moment of worry when I realised I hadn’t even thought about a visa: google in the departure lounge told me not to worry. And despite doing no research at all on any aspect of being in Thailand, by the time I stepped out of the car at the hotel I knew what the exchange rate was and which banks I could use. The best thing is, it didn’t occur to me that anything was unusual about this until a minute ago, when I imagined telling myself 5 years ago that not only would I own a phone, using it to access the internet thousands of miles from home wouldn’t even give me pause for thought. I love living in the future, even if some of it looks like relics already.