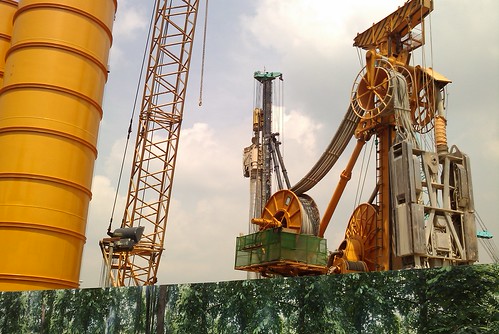 A while ago I was thinking about what looked like a change of attention amongst Singapore’s planners and developers away from the horizontal and towards the vertical:

Singapore definitely seems taller. But lots more of it seems to be underground as well. There are new connectors between Wheelock Place and Orchard MRT, a new subway between City Mall and Suntec, three new floors of shops below ground in Ion mall. Rather than reclaiming land horizontally, from the sea, and eventually from Indonesia and Malayasia, Singapore seems to be reclaiming it vertically. No new territory, as far as the map is concerned: instead, theyâ€™re using engineering to overcome the physical resistances of densely-packed earth and thin, unsupportive air to fit more people (and businesses, and advertising) in the area they already have, in the same way that engineering and ambition enabled them to reclaim vast areas of land from the sea. It must be easier than facing the political resistances that limit horizontal expansion. Or perhaps itâ€™s a way of overcoming them: tunnels between malls in Johor Bahru and Woodlands must surely already be on a plannerâ€™s laptop somewhere.

I just came across the Economic Strategy Committee’s report, published on the 30th January 2010, a month before my speculation on the change of axis. About three-quarters of the way through, there’s this recommendation from the committee:

Adopt a long term perspective and invest ahead to create new land and space. While we can expand our land mass through reclamation as we have done for Marina Bay, there will be limits in the long-run. In the next 10 years, the government should seek to catalyse the development of underground space as a means to intensify land use. We should put in place enablers for underground development such as by developing a subterranean land rights and valuation framework, and by establishing a national geology office. We must also develop an underground masterplan to ensure that underground and aboveground spaces are synergised, and invest in the creation of basement spaces in conjunction with new underground infrastructural projects (e.g. rail), so as to add to our â€œland bankâ€.

Subterranean land rights and valuation framework, and an underground masterplan. Making sure above and below are lined up. And adding to a store by creating more empty spaces. As usual, Singapore is a few steps ahead of my imagination.