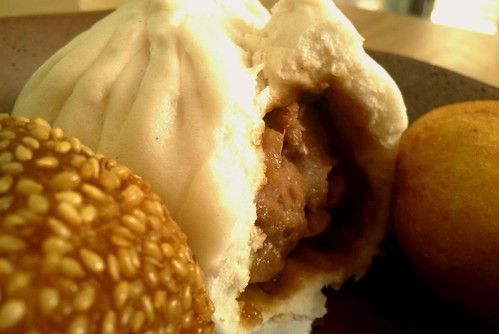 Singapore is pretty good for snacks, nibbles, bites, little somethings and all sorts of treats. I bought the three things above from Tiong Bahru Pau, just round the corner. The one in the middle is a pork pau (also bau – basically means ‘bun’ as far as I can see): the case is light and soft from being steamed rather than baked, slightly sticky to the touch, and inside is a few wedges of pork, with gravy. Was lovely. On the right is something that I’ve never had before and don’t know the name of, but it turned out to be a sort of super-powered Scotch egg: the batter case contained half an egg and some lighter slices of pork or ham. Both delicious.

And the thing on the left is another thing I don’t have a name for, but it made a good dessert. Sesame donut with red bean sauce inside, just the right blend of sweet and savoury. I got these from the kitchen shop on Outram Road, but they’ve got a stall in the hawker centre that’s on my list now.